After returning from Lindsay’s place, John met up with us. The Vulture Walkers pack guarded Serenity while John went to Scourge of the Woods who dictated his challenge: he must sustain a severe beating under the full moon without frenzying and all Sept members must assist in the beating.

With his challenge assigned, we decided on a course of action for taking down the vampire. Because it was going to be day soon, we opted to go as quickly as possible and look in the sewers where it was believed he was hiding. The trip was fairly quick and we found a large sewer drain that we could fit in. 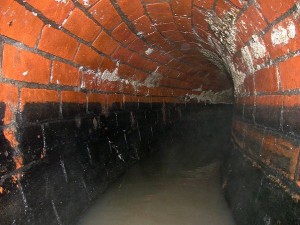 We all went in Lupus form, but the drain was capable of having us in Hispo form. The smells were extremely nauseating to say the least and more than one time I thought I might vomit. Still, I pushed onward. Light was limited, but our wolf senses gave us a bit of an advantage. We had to travel slowly as the sound of us all sloshing water made it difficult to determine where the enemy might come from. 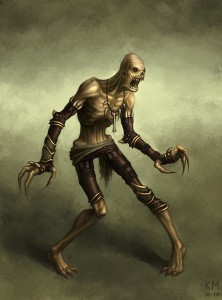 After coming to an intersection that split, we suddenly heard scratching and clicking like someone was crawling along the wall. Sure enough, an emaciated figure scuttled down and tried to attack John. Another appeared near Miguel and attacked. Both were easily dispatched and turned to ash upon dying. 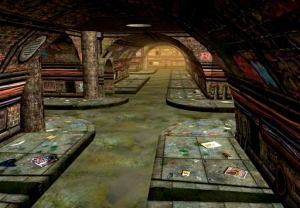 Traveling a bit deeper into the sewers, we found ourselves at an intersection that broke into four paths. Hearing more scratching sounds, we quickly got into formation and prepared for the attack. William tried to be flashy and howl bitterly at them, but he only induced himself into a frenzy as one of the things closed in. He destroyed it as I moved up into position.

We began fighting furiously as they poured in from all sides of the sewer. One of them even managed to bite, but Eli pulled it off. Some of the creatures even began to appear from the water itself as we fought on. We destroyed them all in a quick, but furious fight as William calmed down. I did note that some of the creatures turned to ash on death and others became like a black ooze.

After the battle, we investigated the area. John healed me with a Talen as Bjorn noticed something in the corner. There appeared to be many different wallets including bits of cash, no doubt from the creatures before they were turned. Amongst the items were many tickets to a roller derby event taking place tonight. We realized this vampire had intentions on creating an army by going to the event.

We decided to hunt for them while Wrong Moon returned to the Sept to relay what had happened. In the end, we only found three more and decided to return to the Sept. At the Sept, Wrong Moon suggested that the Vulture Walkers join us because the situation could grow out of hand quickly. They agreed and we decided to get a little rest before the event.

During our rest in the Sept, Eli had a vision of a voice screaming out for someone named Logan. The boy named Logan kept getting in the mind of a man and he told him to stop it. He didn’t want to go insane like Mordecai.

After waking up, we all got together with the Vulture Walkers pack and ate lunch. Eli discussed his vision with us and I mentioned a similar vision I had four years ago. It involved a boy named Logan getting beaten by a man. I never mentioned it because at the time it made no sense.

After getting some food, we set off to the auditorium with the Vulture Walkers in the park’s van. We decided to ask them if they had any strange visions from the Sept. Pasthealer mentioned he also had visions of someone named Randy and Logan as well. Randy was arguing with Logan. Their father was doing something to them, but he couldn’t tell what. There was also something about an older brother, but he wasn’t sure who. 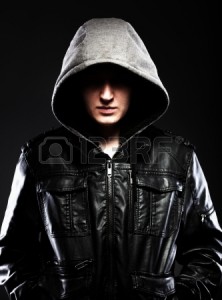 As I surveyed the area, I sniffed for the scent of the vampires we fought earlier. I caught four distinct scents and told the packs that they were here and to come up. As I searched, I found one standing right behind Kelly Ward. I came up and make small talk with them in the hopes the creature would wander off. She asked about Jonathon and I lied and said he went back to take care of a sick Aunt and Uncle, too saddened to tell her the truth. All of the Fourth of July partygoers were there and they kept hitting me with questions.

The creature then wandered off and I made an excuse about having to go to the restroom in order to continue following him. The creature, distinctly a male, was heading to the snack bar. I asked for Eli’s advice on the situation, but he was unsure what to do. Worried, but determined, I grab him around the arm and attempted to pull him into a secluded area to deal with him.

Unfortunately, I didn’t pull hard enough and he freaked out, attacking a nearby girl. He bit into her and she began to bleed out. People were terrified and I used the emotions to slip in and kill the creature with Faith. With the girl severely injured, but myself unable to heal without a breach of the Veil, I escorted her to the medical section.

As I made my way there, I passed a man who looked more like a fomor than anything and had the same scent as the others. He was escorting one of the creatures. I knew it was the master vampire. I passed him, but asked Eli what to do. Still unsure and not up topside yet, he could not decide. I chose to take action, placing the girl down as I said I would look for help.

Returning to the man, I quickly approached him as he headed into the security area and stabbed him with Faith. Unfortunately, in my haste, I didn’t aim properly and did not real damage to him. He spun around and attacked me, but from the security room came two people, a man and a woman. The man’s face was a blur, but I could distinctly make out the woman’s as she shifted to Crinos. Her coat gave her away as a Black Spiral Dancer immediately.

She attacked the vampire, but didn’t do much damage. He knocked her back to the wall as her partner began slaughtering nearby humans to keep the Veil. The vampire snatched up the girl and began pummeling her; even in Crinos form he was overpowering her. I ran up behind and landed a killing blow with Faith.

As he fell to ash, the girl shifted back to Homid and grabbed me unexpectedly. She wielded a feather with a poisoned tip and held it to my neck as the rest of the pack finally arrived. Her partner quickly fled back into the Umbra.

She wanted to be heard out. She was Gretchen “Wyrm’s Bile” of the Hive. Oddly, she said she was sorry for our loss of Jonathon and wanted to ensure that we were with our ancestors together. She said there was a reason we were drawn together. We were the last of our line and the Pride Slayers are tidying up. Mordecai and his pack must be stopped. If we want to learn more and open a line of communication, we must leave a message at parking A18 on the Santa Cruz pier; the place where we killed our first pack of Black Spirals.

She then, curiously, licked my face and went into the Umbra. As she left, John began destroying the phones of the victims and the Vulture Walkers pack unfortunately dispatched the girl I tried to help earlier. We quickly headed into the Umbra before security and the police arrived. There were Scrags hovering around, but they did nothing and left without any incident, another curious event. The Vulture Walkers split off and took the van back to the Sept.

Returning to the Sept, we saw in the distance near the lodge, several muscle-bound men talking with Gina. Eli had only himself and Bjorn approached. As they did, one of them could be seen whispering something to Gina that made her eyes widen. As Eli and Bjorn got within conversation range, one of the men grabbed Gina by the throat and picked up off her feet.

Asking who they were, the men mentioned they wouldn’t be beaten again like at the Battleground. Eli realized these were the Spirals we fought there. Eli asks them what they want and to release Gina. The apparent leader of the group, Brody the Cancer, has his man put her down, but is still holding onto her. He tells Eli they are here to send a message from an ally. Rumors have reached the Queen and we must work to find the traitor quickly. She wants us to meet her at the place we went last time. Eli agrees provided they don’t hurt Gina. Letting her go, they back up slowly and shift to Lupus before running away.

Bjorn took Gina back to the cabin to calm her down after the whole ordeal. On the way to the cabin, I saw Daniel and my heart jumped a beat. He smiled and waved at me as he went to speak with the elders of the Sept. As we entered the cabin, Miguel disappeared. He returned shortly afterwards and said Mabe had summoned him, but didn’t elaborate on it any more than that.

A half an hour passed and Crafty returned to the Cabin. He told us Daniel had come to join the Sept after the vampires assault destroyed his. He brought James Sever as a peace offering. He asks me what I know about Daniel if he was a threat to our Sept, but I told him he was a more solemn Garou and did not appear power hungry.

After hearing about our experience at the auditorium, Crafty was leery about getting too involved with too many different Spiral groups. It’s unlikely the elders would let us do that.