As the fire from the straw began to burn out, Alexander directed his pack to enter the tunnels and find the missing villagers.

Before the pack could go too deep in the tunnels, the sound of nearby Garou above made them return to the pit. At the top of the pit was the Breys Hand pack consisting of Batuani Seven-Shadows, Running Prince, Nightflit, and Pei Ling. The Bear Claw pack climbed out of the pit to greet the new arrivals. The Breys Hand pack happened to be in the area and were scouting ahead for their Sept. 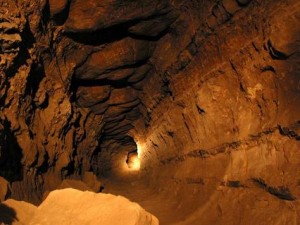 Descending into the tunnels, the two packs came across a fork with seven different tunnels. Only two of them were large enough to move humans through, so the two pack split up with the Bear Claw pack going to the left tunnel. The pack finally caught up to Bites-at-Flies in the tunnel deeper as he tried to smell for the villagers.

Heading deeper into the tunnels, the pack narrowly avoided a trap and arrived at a gate with three different levers. A little deducing by the pack determines that the lock is a combination lock and must be pulled in a certain order. Debate broke out among the pack with Kevin wanting to break it, but Bern and Alexander believing that might alert nearby Spirals. Eventually, the pack worked together to piece the combination together based on the arrangement of the levers. 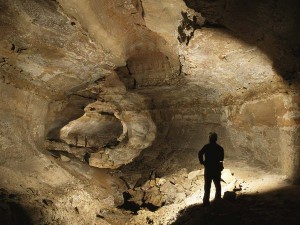 Following drag marks, the Bear Claw pack came across what appeared to be an altar or caern. A chimney leads to the outside with the moon shining down on it. Approximately sixty villagers lay nearby, beheaded with their heads placed on pikes pointing to the altar. Strange glyphs littered the entire area.

Bites-at-Flies said this was a profane ritual designed to attack Luna herself. Alexander remarked that he foreseen this as one of the possibilities for the abduction. The other possibilities involved procuring breeding stock and weakening the nearby area for an assault on the Sept to free the bound Wyrm spirit, Dasbog. Bern said this could be used to cut off non-Black Spiral Dancers from the moon, but the pack was still uncertain of what it could be used for. 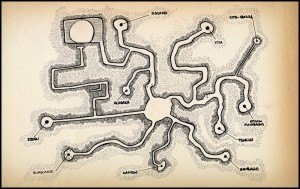 There are several other paths leading out from here and the pack believed the hive had to be massive, possibly over a square mile in diameter. Realizing they need to warn the Sept and leave before they are spotted, the Bear Claw pack returned to the forked and did a Howl of Summoning for the Breys Hand pack. In response, they heard at least six howls. Once the Breys Hand packed arrived, they all escaped the tunnels through the pit.

The Bear Claw pack was more concerned now with warning the Sept of the Red Cedar and tried to leave, but Pei Ling protested that they agreed to visit their Sept. In response, Alexander sent Bites-at-Flies back to the Sept to warn them while the Bear Claw pack accompanied the Breys Hand pack to their Sept that was about a one day run from the village. 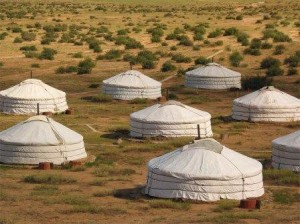 Arriving at the encampment, the Bear Claw pack could see warriors being trained by the leader of the encampment, Qorjin. There appeared to be over 200 people in the area with tents spread throughout. As the pack waited for him to finish his teaching, the Breys Hand pack talked a little about themselves and told the Bear Claw pack they were councilors to Qorjin and he was second in command to Ogedie Khan, leader of the Sept.

After Qorjin was finished he greeted the Bear Claw pack cordially and told them it was their tradition that guests receive hospitality for three days and nights before beginning business talks. The Bear Claw pack was led to a lavish tent where they were fed, bathed, and sated sexually for the predetermined time, but not before Alexander warned them not to overindulge in case they were required to repay the favor.

After the hospitality, Qorjin sat down with the pack to discuss what he required of them. After learning that the pack wasn’t from the area, Qorjin realized this would be for the best since we were effectively neutral to the situation. He told the Bear Claw pack that he was a scouting party for the Mongol hoard of more than 6,000 that were marching throughout the lands to claim them. If the Sept of the Red Cedar accepts vassalage to Khan and his horde, he will leave them alone in return for help later on when needed.

After sending Qorjin out of the tent for a moment, the pack spoke to each other through the totem silently. They agreed to it, but not before Alexander warned them of the potential for being forced into a rock and a hard place with the two Septs potentially warring against each other. After giving their answer to Qorjin, the pack immediately left the Sept with the threat of the Black Spirals looming.

Returning to the barn outside of the Sept, they called for Worthy who sets up a meeting with Voice of Thunder and a few others of the Sept. After being told of the situation about the Black Spirals and the threat of the Mongols, Voice of Thunder questions why we need to remain here since their task is effectively complete. Alexander tells them they want to avenge their fallen White Howler brothers. When asked about avenging them, glory for the deeds, the nature of the response he gave, and whether or not they are involved with the Spirals, Alexander corrects Voice of Thunder and tells him the Black Spiral Dancers are no longer their brothers but a twisted perversion of the tribe.

Voice of Thunder is obviously hesitant. He is concerned about both threats at the moment, but also the disrespect he was shown when he asked Alexander to hand over his klaive to Vladimir earlier. Alexander is forthcoming about being selfish with his tribal heirloom, but also concerned that handing the klaive to a Fenrir would restart a war with the tribe that had just begun to die off.

Offering to make amends and restore their honor and respect, Voice of Thunder proposes two things they can do. He first asks the pack about the importance of rank, which all of the members give an impassioned speech, effectively convincing him they understand it.

Finally, he tells the pack to pledge a year of servitude to the Sept in order to learn more of the importance of rank and understand their roles in life. Alexander agrees to it.

Voice of Thunder then tells of the Battle of Samara Bend when the Mongols attempted to do this once before with 1,000 men. They were repelled with a mere 30 Garou, but with the use of kinfolk and the threat of the Black Spiral Dancers, he is unsure if they can prevail or if they should bend a knee to Khan as it could be a trap.

Voice of Thunder then asks about whether the kinfolk of the village were safe, but the Bear Claw pack as well as Bites-at-Flies was unaware of the kinfolk. It is apparent that a third of the village was kinfolk, confirming Alexander’s suspicion that they were abducted for breeding purposes. Most of the Sept thinks it wasn’t worth it to risk a pack’s life for kinfolk.

Alexander voices his concern over the potential of unleashing Dasbog, which Voice of Thunder agrees as Khan or Qorjin would not be able to control once freed. He also says they don’t have the Theurge power to re-bind him. Voice of Thunder then asks Alexander and the Bear Claw pack what they should do. However, after being humbled by the experience of regaining the Sept’s respect, the Bear Claw pack chooses to let their Sept be the final decision as they are not sufficient rank to make such a call. It is agreed then that a moot will be called of the entire Sept in order to determine the fate of the Sept of the Red Cedar…