After watching the fall of the White Howlers, we were pulled from our ancestor’s bodies like before. We traveled again through the tunnel in the deep Umbra, fighting the Drowned King constantly as we moved forward in time again.

The Drowned King bucked once again, but this time, instead of being forced into an ancestor’s body, we were suspended in air to merely witness the events unfold around us. We had moved 1,000 years into the future in Northern Ireland. Each of us hovered over our ancestor and we knew them as the Bear Claw pack of the Sept of the Three Stones. My ancestor was Alexander Mac Fionn, Eli’s was Malcolm “Drops-the-Hammer”, Miguel’s was Cormack, John’s was Arthur “Heartstabber”, William’s was Kevin “Broken Arrow”, and Bjorn’s was Bern “Talks-with-Herbs.” Agnis had appeared on the Drowned King, by presumably the same way as Jonathon had before. Her ancestor was Cateran Firebrand.

We watched as our ancestor’s spent a great deal of time on bawn patrol. They were the youngest pack in the Sept and therefore lacked any level of power or respect in the Sept. After returning from one of their three day patrol then one day rest runs, they were preparing to enjoy their time off when a Moon Bridge opened up in the Sept.

Preparing for an attack, all of the Garou readied themselves for the worst when only one Garou came through. He said his name was Worthy, a Shadow Lord from the Sept of the Red Cedar. He was in dire need of assistance from a pack of Fianna. Hugh Fire Starter, the leader of the Sept, was reluctant to do so and wanted to gather all of the packs in order to choose the proper one. At that moment, Cateran nudged Alexander to volunteer which he did.

Hugh was very apprehensive of this, considering the pack’s youth and experience. Still, when pressed by Hugh, Alexander agreed to do this for them. Wasting no time, the Bear Claw pack gathered what few things they could and headed into the Moon Bridge. As they traveled, they noticed that the Moon Bridge was falling apart and being repaired by Lunes, something unusual to see. 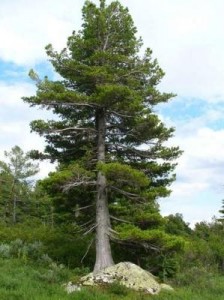 Arriving at the Sept of the Red Cedar, the pack surveyed the area and noticed a massive tree with Garou from every tribe surrounding it. As they walked towards the tree, Worthy told them a story of a would-be god who turned Wyrm creature two centuries ago. It was bound to the tree and turned into a caern.

The pack was led to a muscular Garou by the name of Voice of Thunder. He was the Sept leader. He told us that the Prophecies of Shadow worry the Garou here and if they can help the Sept, his Sept will owe the Sept of the Three Stones a favor. From here, the pack was introduced to Yarls, Seer of the World. He was the Sept’s Warder and showed the pack to where they would be staying, an old, dilapidated barn.

Accepting whatever they were willing to provide, the pack started to settle in when Yarls asked about their fetishes. When each of the pack told him about theirs, he left. After a short conversation amongst themselves, Yarls returned. He knew the legend of Caladbolg, Alexander’s grand klaive, and that it would be best to keep that fetish hidden because many will want it.

This statement made the pack ill at ease and Alexander chose to have the pack alternate guard for the night in order to prevent any thievery. In the meantime, Malcolm and Cateran hunted and managed to nab a very large deer for the group. Bern cleansed the food, leery of potential taint in the area. The night passed and there were no attempts to steal anything.

Returning to the Sept the next morning, the pack notices even more new Garou in the area. It is obvious something big is about to happen. Voice of Thunder speaks with pack about the arrivals, but they are distracted watching Yarls whisper to a massive Garou behind Voice of Thunder. As he finishes speaking, the massive Garou along with another man approach the pack.

The massive Garou is Vladimir “Meat Render” and he realizes he is too high of a rank to challenge for Alexander’s grand klaive so he simply asks him for it. This sets in motion a series of conversations that nearly cause violence. Kevin and Cateran believe he have no right to ask for such an ancestral heirloom that has been in Alexander’s family for three centuries. Cateran manages to convince the other man with Vladimir, who is serving as an interpreter, but Vladimir just shoves him aside. Kevin at this point is antagonizing him to the point of peeing on his boots.

Voice of Thunder sees then and intervenes. He asks that Alexander give the klaive to Vladimir which he flatly refuses. Voice of Thunder says this was a test and he failed. They would no longer have the Sept’s protection, nor food, and they would not be allowed their weapons in the Sept. As the tense situation wrapped up, the pack returned to the barn for the night.

Setting up a watch, as Alexander was now surer than ever someone would take their possessions, they rested until a knock came at the door. A bearded, foul-smelling Garou named Bites-at-Flies asked if he could speak with the pack. They invited him in, showing him kindness he wasn’t used to. He told of strange happenings going on in the nearby village of Bilar. Families had been disappearing lately and he could not be sure of the cause. 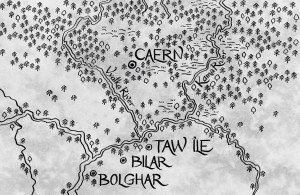 The pack agreed to help the Bone Gnawer without question, likely because of his humble nature. The trip was an hour away from the Sept in Lupus form. Arriving at the village, the pack noticed that the palisades, which had recently been erected, were torn down in one spot. It was obvious either Garou or some type of animal did this. 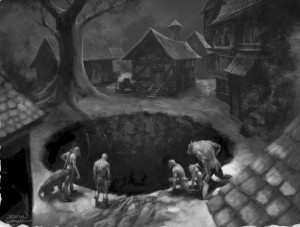 Heading into the village, the pack found no signs of life anywhere. There were no signs of violence either. The pack did find drag marks heading to the center of the village. As the pack headed there, they came across a gigantic hole, fifteen feet across. Bites-at-Flies said this was not here before. 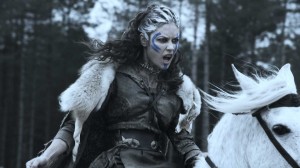 From the hole, the pack could hear a child sobbing down below. Grabbing some nearby rope, Cateran and Malcolm headed down into the pit with some torches. Looking for the source of the sounds, they could see a tunnel from which a woman bearing facial paint came forth. Behind her appeared six more individuals. It was a trap.

A battle quickly broke out with the rest of the pack minus Kevin jumping into the hole to engage what now appeared to be Black Spiral Dancers as they shifted. The woman attacks Cateran and Alexander rushes to his aid as the woman nearly kills Cateran with her klaive. Driving Caladbolg into what is obviously the Alpha of the pack, Alexander attempts to kill when two Garou intercept him. As the others spar off against a respective Garou each, Kevin up above drops a wagon onto the battlefield. He then throws a torch down, lighting the area a blaze. 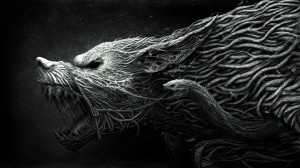 As fire begins to rage across the hole, Alexander leaps over his attackers and drives his blade into the Alpha who had been carried away from the battle. The Garou carrying her mutters something in a language no one understands and causes Void Snakes, the creatures who made the hole and tunnel, to attack Alexander.

As each of the pack slay their enemies, Cateran, now healed by Bear, the pack’s totem, charges to Alexander’s aid. Killing the Void Snakes, the pack gets into the tunnel outside of the fire to heal. Bern cleanses Alexander’s Void Snake wounds, which are tainted. The pack now stared into the tunnels, curious about what lie ahead…