After preparation for confronting Minotaur was complete, I proposed the idea of going to one Gina’s parties before heading to Minotaur’s realm. I felt the confrontation with Minotaur could go very badly depending on how we act. I gave Eli my phone and he called Gina. The next party would be on July 4, which was three days away. Gina seemed pleased we were going to go.

I suggested we use the time to learn any gifts or make more talens in the meantime. However, Bjorn was eager to confront Minotaur and the pack decided to go immediately. I was a little disheartened, but still ready to go.

Eli opened the platform again and we were transported. This time, the trip was very dark and frightening. It was daytime and banes were all about. They couldn’t get to us on the platform, but it felt as though they might try.

We finally made it to the Labyrinth. The maze seemed to go on forever and was intimidating to say the least. Whoever made this maze was long gone or at forgotten. I assumed only Minotaur would know who created it, maybe it was him.

Arriving at the beginning of the maze, Eli tried to see if he could take a shortcut by climbing the walls. He was met by a vicious supernatural attack from the realm itself. It appeared cheating was not an option.

We started to navigate the maze when William took a wrong step and part of the maze collapsed behind him. He barely got out of the way, as we continued. I shifted to Lupus form and told the others to do so as well as our senses would be better in that form.

Jonathon nearly met his end next as a misstep caused the floor to disappear underneath him. Thankfully, John grabbed him before he could fall. As continued on, we ran into a young girl with white eyes and a stitched mouth. A part of me wanted to help her and undo the bindings on her mouth, but I felt this might be a trick of the maze and we pressed on past her.

We heard strange sounds like someone stalking us and a baby crying. The sounds frightened William and we continued until we ran into a wall with a face. The wall looked like it was trying to talk, but could not make any sounds. We ignored it and kept going towards the center. A disturbing female with yellow eyes and a giant mouth watched us from the top of a wall but we refused to get near her. Miguel’s shadow pointed out a figure with eyes on his hands following us, but we kept our minds on the goal of getting the center. 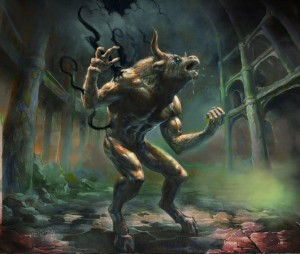 Finally, arriving at the center of the maze, we saw Minotaur in all his Glory. He was nearly 30 feet tall with black tendrils entering his body from the sky. He looked pained and confused. He stared at me menacingly, asking if I was a child of Pegasus. I quickly told him I was a child of Stag. We tried talking to him, but his answers were almost nonsense. The Wyrm had a strong grip on him and Jonathon suggested to me we start the Rite.

We started the Rite of Cleansing, staying outside of his range, while the rest of the pack tried to grapple him and prevent him from attacking. He stomped, knocking us all to the ground in an impressive display of power. Jonathon realized the Rite wasn’t working while the tendrils were attached and told the pack to destroy them.

While the pack began attacking the tendrils, I shifted to Crinos in case I needed to help the pack if they couldn’t do it. After one of the tendrils was severed, Minotaur babbled incoherently again and somehow caused John to frenzy. We were working against borrowed time, as we couldn’t kill Minotaur.

“I don’t understand. I was weak. I needed strength. I need to think.”

It was then Tick began talking to Jonathon to finish Minotaur off or let Tick do it. Jonathon took the tick off his body, threw it at Minotaur, and it quickly grew into the true Tick. Eli and Bjorn stood in the way of Tick, not letting her harm him while worked on cleansing the area from the black ooze given off by the tendrils when they were severed.

The conversation was tense. Quetzal appeared and watched us intently, gauging what our decision would be. Tick implored Jonathon to let him be killed, saying he was evil. However, the other members of the pack declared since Minotaur was broken free of the corruption, he would be more able to fight it in the future. We asked Minotaur if he would give up the Skin Dancers since we didn’t want to kill him. He refused, but did reveal to us the location of Samuel Haight.

Realizing the threat of Samuel Haight was the immediate danger, we decided it should left up to the Skin Dancers to choose who their tribe totem is. Minotaur showed us the way out after we asked him if he would be able to cleanse his realm now that we freed him. He nodded and said he would and we left navigating the maze again.

Once we returned to the Prenumbra, we had Quetzal send a message to the other Septs about his return while he also opened a Moon Bridge for us to the cemetery where Haight was. It was then Tick began whispering to Jonathon to go confront Samuel Haight alone. She told him he could do it alone and he was agreed, being transported there by her.

Realizing Jonathon didn’t return to the physical world with us, we called out to him through Quetzal. He told us he was going to take care of it and the race was on for us to save Jonathon and stop Samuel Haight.

Jonathon stood at the cemetery surveying the incoming fog. It was clear Samson was up to something. He saw several strange creatures approaching he had never seen before. As he entered, he told Tick to go get Samson while he confronted these fae creatures as he found out what they were. The creatures looked like they might attack when Samson motioned them away.

Seeing Samson in Crinos form for the first time was frightening to say the least, but he mustered the courage to talk to him. It was clearly apparent talking with him that Samson was dead and Samuel Haight had been truly reborn through the fetish given to him.

Tick whispered to Jonathon to tear it off him and take the power for himself. Jonathon slyly inched closer to Samuel Haight while talking about how he could help him. Samuel seemed receptive to the idea and Jonathon offered a talen he created. Dropping the talen as a ploy, Jonathon suddenly shifted to Crinos form and with some effort tore the fetish off Samuel’s back.

Samuel Haight looked at Jonathon angrily and swore he would die. This frightened Jonathon to point of slipping into the Prenumbra unwillingly. There he saw several banes closing in on him. He asked Tick for help and she told him to absorb the fetish. Pressing the fetish into his chest, a new voice echoed in his head to command them. Samuel Haight quickly entered the Prenumbra and tried to send the banes after him. Jonathon stopped this by commanding them at the same time and brought forth more fae at the voice’s urging declaring “I am master now!”

Infuriated by this, Samuel swore to do the deed himself, charging at Jonathon. Jonathon ran out of the Umbra with Samuel in quick chase and the summoned fae following him.

We arrived at the cemetery to a strange scene. Initially, there was nothing there except bizarre looking creatures I had never seen before. Then, without warning, Jonathon appeared out of the Umbra with Samuel Haight chasing him and more bizarre creatures. We all charge in Crinos form towards Samuel Haight.

Once Jonathon seen we were coming, he sent the fae after the ones Samuel Haight brought forth. Samuel Haight realized he was outnumbered and tried to retreat. However, Eli quickly leaped into action quite literally and jumped on top of Samuel Haight. John attacked him dealing minimal damage and I stabbed him with my fang dagger, killing him, and causing him to rage back.

We stood there, rather than basking in Glory, feeling dumbfounded. Eli demanded to know what was going on with Jonathon and the creatures. Jonathon told us he could command fae, the creatures we saw, and banes with the fetish he had taken from Samuel.

Jonathon implored Eli to keep it, realizing it was a potent weapon for the pack. Eli demanded he destroy it and we told him it would only lead to his ruin if he kept it. Jonathon sent the summoned fae away who ate the fae Samuel summoned before leaving. He then shredded the fetish while John took the grand klaive to return to its rightful owners, the Shadow Lords.

It had been a long journey up to this moment. We took and disposed of Samuel’s body and made our way back to the Sept. Still, I pondered many things while we returned. Had all of this been by Tick’s design or was it just a happy accident we fixed things? Most pressing was the dread that maybe more of these fetishes had been made and Samuel could return. I kept this to myself as we returned to the Sept. I had a party to get ready for and it was more terrifying to me then facing Samuel Haight.